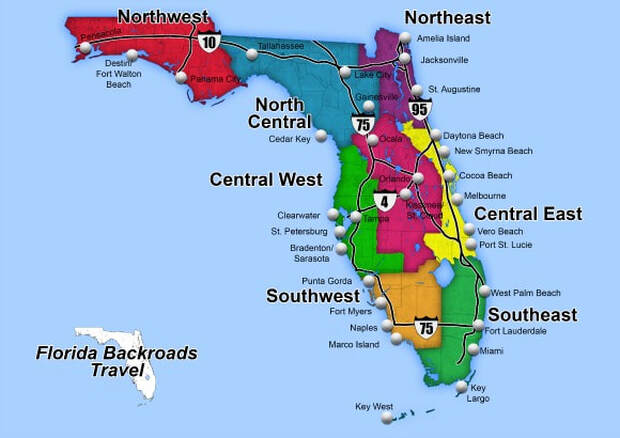 Note - Regional content below by Awesome Florida. Regional Map above by Florida Backroads Travel. Added content & photo ops from personal photo ventures and shoots (bulleted links).
Florida is a land of enchantment and excitement.  For many, it is a tropical vacation paradise with turquoise and emerald waters that wash on sandy white beaches shaded by palm trees that sway in the warm sea breeze.  For others, it is a land of fascinating theme parks and attractions. Yet others are drawn to the exciting cultural diversity of its modern metropolitan cities.

Still others seek Florida for its natural beauty - its varied terrain of hardwood, pine and cypress forests, swamps, rivers, springs and mangrove waterways where within live hundreds of species of fish, birds, unique plants and interesting animals.  Plan repeat vacations with any of these different themes for a wide variety of experiences!

Cities and Towns by Region  www.visitflorida.com/places-to-go/
A special thanks to Mike Miller's Florida BackRoads Travel website which provided information on many of the destinations explored.

Northwest:
"The Northwest Region of Florida includes the Panhandle and the Big Bend and boarders the Gulf of Mexico to the south and Georgia and Alabama to the North. Florida's capital city, Tallahassee, is part of this region. The culture of the panhandle is more closely related with the deep south of the boarding states. Some of the most beautiful beaches and natural coastlines are located in this region and includes the Emerald Coast and the Forgotten Coast."
Counties in this Region include:  Jefferson, Leon, Wakulla, Franklin, Liberty, Gadsden, Jackson, Calhoun, Gulf, Bay, Washington, Holmes, Walton, Okaloosa, Santa Rosa, Escambia (id #4)

Towns we visited and photographed in the Northwest Region:
North Central:
"The North Central Region of Florida includes Gainesville, Ocala and the Big Bend and boarders the Gulf of Mexico to the south and Georgia to the North. (id #4) Further inland is the capital city of Tallahassee.  This elegant city has a distinct southern air.  It is set within rolling hills decorated with majestic moss draped southern live oak and magnolia trees.  Although a modern city by any measure it retains much of its historic flavor with numerous 19th century homes and mansions."

Additional Cities' and Towns' information and photo opportunities in the Northeast Region: ​
Northeast:Northeast Florida is renowned for being the First Coast, with St. Augustine, the nations oldest permanent settlement. Located on the East coast bordering the Atlantic Ocean, this region includes Jacksonville and St. Augustine and counties of Flagler, Putnam, Baker, Clay, St. Johns, Duval, Nassau Counties. (id #4)
Central East:
Central East Florida Region includes the Space Coast that spans the counties that run along the east coast bordering the Atlantic Ocean. From the renowned beaches of Daytona, through the Kennedy Space Center, Cape Canaveral to just north of the Palm Beaches, this region is a popular location for beach-goers worldwide.
Includes Martin, St. Lucie, Indian River, Brevard and Volusia Counties. (id #4)

The east coast of Florida is an exciting blend of beaches, space ports and theme parks.  Daytona Beach is world renowned for its beaches and festive atmosphere, and of course, the Daytona International Speedway.  Cape Canaveral and the Kennedy Space center is the launch point for most of America's spacecraft.  Kennedy Space Center offers an impressive array of rocket displays and tours.


Central:
"Central Florida is a vacationers paradise! Disney and Universal and hundreds of other attractions in the area keep the visitors and locals entertained. But there are also numerous recreational activities in the area where nature and wildlife are plentiful. Central Florida has numerous lakes, springs and parks and is not only a great place to visit, but a great place to live and work!
Includes Hardee, Highlands, Okeechobee, Polk, Osceola, Orange, Seminole, Lake, Sumter Counties." (id #4) ​
West Central:
Central West Florida consist of the Tampa Bay area including the areas north and south along the West Coast of Florida. Bordering the Gulf of Mexico, this region includes part of the Nature Coast, the Sun Coast and the Cultural Coast. The diversity of the Central West region varies from nature, to beautiful beaches, to arts and cultural, to the popular Busch Gardens theme park.
Includes Charlotte, Desoto, Sarasota, Manatee, Hillsborough, Pinellas, Pasco, Hernando, Citrus Counties. (id #4)

The west central area offers natural wilderness beauty to the north and miles of sandy white beaches and modern cities in the central to south areas.  From Clearwater through Bradenton and Sarasota and areas within, have some of the nicest beaches. Tampa and St. Petersburg are both contemporary cities, with sports, arts, museums and attractions including the Florida Aquarium and the Busch Gardens theme parks in Tampa.  Within Tampa's limits is colorful Ybor City which is known for its cigar industry heritage and still retains its Cuban and Spanish flair.  Ybor has a party atmosphere which comes to life in the evenings and weekends.  This region has a lot to offer.
Southwest:
Southwest Florida includes the Lee Island Coast with the beautiful Gulf Coast beaches to the natural Everglades to Lake Okeechobee to the Florida Keys. Includes Monroe, Collier, Hendry, Lee, Glades Counties. (id #4)
Fort Myers was put on the map by genius and inventor Thomas Edison during the late 1800s.  His winter home still exists today and is available for tour. Along the coast are the beautiful islands of Sanibel and Captiva.  This area is rapidly becoming a new vacation hot spot. Naples, an affluent beach city, is one of the last cities of size before the Everglades.  Naples is the self-proclaimed "Golf Capital of the World" by having a great concentration of golf courses. The Everglades in the southern most area is without exception a natural wonder of the world.  One can tour or drive through the Everglades to appreciate this natural wonder.

Southeast and Florida Keys
Southeast Florida is the most populous Region in Florida and includes Miami-Dade County, Broward County and Palm Beach County. The diversity of the region ranges from the latin influence, art deco flair, boating and fishing communities.

Florida Keys is located at the southern tip of the Florida Peninsula, The Florida Keys are a stretch of islands that curve around from Miami south and to the west with Key west being the southernmost point in the continental U.S. The Florida Keys extend west to the Dry Tortugas, a small archipelago of coral islands about 70 miles from Key West and only accessible by boat or small plane. The Overseas Highway, the southernmost section of U.S. 1, connects the Florida Keys and extends 113 miles from Key Largo to Key West with a series of bridges, most famously, the Seven Mile Bridge. The Overseas Highway is like the mainstreet of the Keys and the various islands and destinations are located by their mile marker. These little green mile-marker signs start just south of Florida City with number 127, and extend all the way to zero in Key West.

The small islands of the Florida Keys are made up of ancient coral reef. Offshore is one of the largest barrier reef systems in the world, the Florida Reef, which makes the keys a haven for snorkelers and scuba divers. While the Florida Keys are not know for their beaches like many other areas along the coast in Florida, water activities including fishing, boating, scuba diving and anything on the water, is common in the Keys.

The Tropical climate keeps the temperature warm year round with very little temperature variation. The Keys have basically two seasons, like much of south Florida; from June - October, it is rainy and hot, from November - May, it is drier and just slightly cooler. Much of the Florida Keys are protected with Biscayne National Park, The National Key Deer Refuge, Crocodile Lake National Wildlife Refuge, Dry Tortugas National Park as well as the Florida Keys National Marine Sanctuary. (id #4)

From West Palm Beach through Fort Lauderdale,  Miami and into the Keys exists a phenomenal line of cities and ocean front interests.  Miami is a melting pot of architecture and cultures with a strong Latin and Caribbean influence.  Miami Beach has been a long-time vacation favorite and is famous for its superb sandy beaches and its Art Deco buildings. The Keys, including Key West and Key Largo, are a string of islands connected by the Overseas Highway. The water sports along this narrow chain of islands is nothing less than spectacular and a favorite for water-sports enthusiasts!